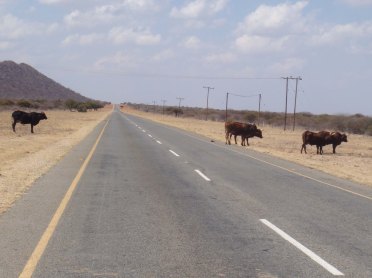 Most of the roads leading out of Mahalapye are straight. Sitting directly on the Tropic of Capricorn between Botswana’s capital, Gaborone, and its second city, Francistown, the sparsely distributed population outside of this bustling mining town meant that road builders were able to construct straight, undeviating arteries through the African countryside to connect it with other settlements of importance. Drivers in Botswana can expect mile upon mile of baking tarmac, stretching far towards the horizon and culminating in the mirage of a shimmering liquid haze.

The World Spine Care project in Botswana takes in not just the District General Hospital of Mahalapye but also the rural community of Shoshong. Established in 2012 with the backing of the Botswana Ministry of Health, the clinic in Shoshong serves  its 7500 inhabitants and the surrounding villages and settlements.

Once of strategic importance due to its location on important trade routes through the region, Shoshong’s influence and population declined over the centuries, but its magical hills in an otherwise flat landscape attracted many visitors and settlers, including the missionary societies from England and Germany in the 1850s. Here, spectacular scenery and varied wildlife combine to make it a hiker’s paradise.

The journey west to Shoshong from Mahalapye features forty kilometres of mostly dead straight road. Broken only by gentle curves around the Shoshong hills it has few features to afford it any protection from the elements. Cattle and goats graze contentedly by the roadside; wild donkeys occasionally amble across and impressive birds of prey sweep overhead in search of road kill.

As we trundled into the village, our pace rudely slowed by a series of unforgiving speed humps outside the local primary school, I had my first glimpse of Shoshong. At 7.45, I realised it had to be rush hour as a team of three, smoky-grey donkeys trotted past us in the opposite direction hauling a cart laden with freshly-collected wood. Small children wearing immaculate uniforms skipped along carrying rucksacks almost as big as themselves as they

made their way to school. Accompanying them were their parents, gripping colourful umbrellas to shield their skin from the early morning sun as they coaxed their small charges into the playground. A hundred yards further on, an fascinating mix of dust-covered buses and coaches stood ready to transport their passengers to work in neighbouring towns and villages.

Driving off the road, past street vendors already set up for the day and displaying their wares under makeshift canopies, a solitary rooster announced our arrival. Before us sat a prefabricated, single storey building, mounted on steel legs fronted by a small flight of steps and a gently sloping ramp. A sign mounted on wooden posts announced that this was the Shoshong World Spine Care Clinic.

As we bounced over the uneven, rust-coloured earth I noticed a small group gathering under the shade of a tree; an elderly man in a wheelchair, two or three large women wearing wide-brimmed hats and a thin, younger man, his arm bandaged and his body twisted as he conversed happily with the others. All were clutching what looked like A4-sized exercise books. This, it transpired, was the waiting room, Shoshong style. 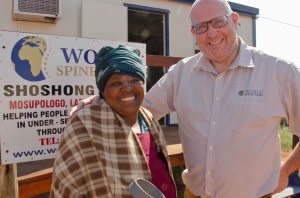 (www.worldspinecare.com) is a global charity committed to tackling spinal disorders in the world’s most underserved communities. Not only are spinal disorders the leading cause of disability globally, but they constitute the disease with the greatest economic impact in the developing world.

Botswana, a country the size of France with a population of just over 2 million, was the first of the World Spine Care projects. With extremely limited access to primary spine care and just one spinal surgeon for the entire country, those with back and neck pain in rural communities are often left in chronic pain or permanently disabled. World Spine Care aims to make a difference to these people by providing sustainable, evidence-based care, education and preventative strategies.

There was no time to lose in acquainting myself with the protocols and layout of the clinic. Its tardis-like interior contained two treatment rooms, admin office, washroom and reception area. Not only that, there was WiFi! I was instantly impressed. With the 90-second tour completed, I was ready to go.

That first morning in Shosong was unforgettable. Twenty-five years as a chiropractor, cosseted in private practice with a largely affluent Gloucestershire population seemed a million miles from what I was encountering. This was Africa in the raw, and I was seeing patients for whom back pain was not simply an inconvenience, but a devastating condition which impacted on individuals, families and communities.

The first patient could not have illustrated this stark truth more graphically. The old man waiting patiently outside the clinic on our arrival had wheeled himself slowly and painstakingly up the ramp and had been led into my room. The wheels of his chair were caked with mud and dirt and his arthritic hands were calloused from years of propelling himself across unpaved and rutted paths. He greeted me with a broad, toothless smile as he extended a hand of friendship, eager to receive whatever treatment could be afforded him.

As he positioned himself beside the state-of-the-art Elite chiropractic table, he applied the brakes of his chair, removed its side arm support and, with massive effort, slid himself across onto the table.

As I scanned his clinic folder and his medical records (contained within the A4 folders carried to every appointment) the medical catastrophe that had befallen him became clear. Some 15 years earlier he had contracted TB of the spine. Extremely rare in Europe, but still a major health problem in Africa, tuberculosis of the spine can lead to vertebral collapse and spinal cord damage. It has devastating consequences.

Before me, this local Shoshong man exhibited them all. TB had ravaged his spine, leaving him hunched and deformed. Where his spine had disintegrated, the essential neurological pathways leading from his brain to his body had been irreparably compressed, leading to complete paraplegia. As he manoeuvred himself out of his chair, I was reminded of the indignity of spinal cord injury. Rising from a roughly hewn piece of thick, uncovered upholstery foam, his lifeless limbs dragging beneath him, he carefully ensured that his indwelling catheter and drainage bag did not become detached.

As he lifted his tattered pullover and threadbare shirt to expose his broken spine, the true meaning of World Spine Care struck me. He had come to the clinic, because what was being offered, here in rural Shoshong, was making a difference. Through Malebogo, our health care assistant and interpreter, he explained that the treatment provided to him was helping him and making his life easier. It was immediately apparent that World Spine Care was supporting this close-knit community, one spine at a time.

I was still reeling from my humbling encounter when my second patient at Shoshong made his way into the treatment room. A much younger man, he limped badly with the aid of a crutch and wore an elastic bandage on his wasted forearm. With each step he was forced to hitch his hip and swing his leg clumsily forward. His speech was slow and laboured, his face contorted by the stroke that in an instant had consigned him to a life of permanent disability.

For the first time, I was seeing in the flesh the manifestations of a disease that in Botswana afflicts one quarter of the population over fifteen years of age. With a prevalence second only in the world to Swaziland, HIV is endemic in Botswana.  While the provision of free antiretroviral drugs has increased the life expectancy from 49 in 2002 to 53 in 2012, new cases reported annually have not declined.

Quickly researching on the internet, I discovered that the effects of HIV increased the risk of stroke by up to 40%. Like the patient before him, here was a man for whom the prospect of recovery was nil, yet was finding World Spine Care was making his life more tolerable.

And so the morning went on. More and more people made their way slowly along the dusty track to the clinic’s open door. Generously proportioned ladies, their knees painfully swollen by arthritis; smallholders whose backbreaking labour under the scorching African sun had reduced them to a slow hobble; mothers, for whom multiple births and decades of housework had left a legacy of spinal pain: here was a proud community that modern technology had barely touched and for whom nineteenth century working practices were still the norm.

As my first day in Shoshong drew to a close, the power went off. The intermittent electrical supply in Botswana, whether due to one of its spectacular thunderstorms or by system failure, is legendary. People shrug their shoulders, accept that power will probably be restored soon, and carry on. Not wishing to appear phased by having a suddenly inert treatment table, no air conditioning and limited light, I soldiered on as if nothing was amiss.

By the time my last patient walked out of the door, the temperature in our prefab building was over 40 degrees. As I quickly slugged back a litre of cool water and breathed a contented sigh, I reflected on my day in this remarkable environment. I had been enlightened, humbled, educated and enriched.

have prepared me for the rush of emotions that Shoshong delivered on that first day. Each subsequent clinic session has provided yet more. The first patients of the day still gather under the tree. Animated conversations conducted in Setswana continue to fill the air. The sun still beats down.

And the rooster is still crowing.